skip to main | skip to sidebar

Apologies for being a few days late. Sara is the winner.  Sara, I just sent a private message to your Studio Calico account. Congratulations!
Posted by Michelle Springer at 10:15 PM No comments:

Come out, come out, wherever you are.  It has been several days and I have not heard back from my winner. If I do not receive a response by Sunday at midnight, I will be drawing another name.

Thanks!
Posted by Michelle Springer at 5:46 PM No comments:

Thanks to all the ladies that entered the RAK. Apologies that I didn't get this posted on Saturday or Sunday.  Let's just say that both my husband and I had fun on his birthday.  I even pulled an all nighter and did not sleep on Saturday night.  I have not done one of those for about ten years. I am definitely paying the price. James found me last night in our bedroom with my laptop in hand and completely passed out.

Enough about me....the winner is

I'll be sending you an e-mail tomorrow with the details!
Posted by Michelle Springer at 8:35 PM 2 comments:

Thought I would share some new goodies with folks. Freckled Fawn released their newest wood chips last night and with Valentine's Day coming soon, the heart wood chips would be the perfect addition to a layout, project life page or even for packaging on gifts. 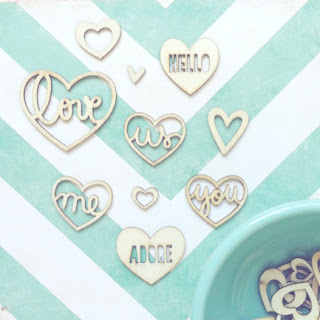 Shipping was really expensive this time around for Canadians, I figure that has to do with the fact that I bought 12x12 paper.  I wanted to give my fellow Canadian girls the opportunity to get some of this fun stuff without having to pay a single penny (I guess that expression is no longer valid now that we did away with the pennies, isn't it?).  As always, this giveaway is open to anyone and everyone.  Since I am already going to pay shipping costs, I might as well add some more product into that envelope.  Here is a picture of what will be included in the RAK.  Apologies for the tiny picture.  Just a quick iPhone shot. I'll replace it with a better image tonight. 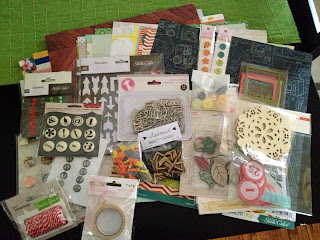 There is so much stuff, I couldn't get a picture with all the contents.  99% of this RAK will be brand new in its original packaging. As soon as I receive the heart wood chips from Freckled Fawn, I'll send out the package.  Just leave me a comment, and I'll draw a winner on Saturday, February 9th.  My hubby's birthday ;)  Good luck!
Posted by Michelle Springer at 2:18 PM 16 comments:

I posted this information on the Two Peas message board, and wanted to add it here as well.  Also - I am also willing to entertain offers that are less than the listed price.

Pulling a fast one on my husband

Let me ask you this.  Does your husband or significant other have a mental inventory of every piece of clothing you have in your closet?  Mine does.  It annoys.  And I have many a pair of pants to keep track of.  You'd think I would be able to slip one scarf past this man.  But no, he can't be fooled.

Fall fashion.  I adore it.  The boots, the coats, the scarfs, the cozy cashmere sweaters.  Most of the time it comes up from Chicago via Rosie's store.  But there has been one clothing line I have had my eye on for quite some time, and their fall line was too good to pass up.  Have a look at Emerson Fry.  I have never owned a piece of animal printed clothing in my life.  I don't have an issue with it, as long as it is used in moderation.  The first piece that caught my eye was this zebra printed top from their summer line, but I never bought it. 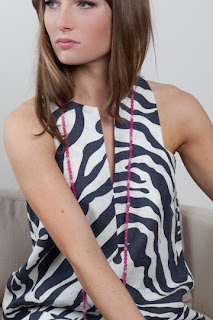 The second piece was this amazing leopard print coat.  It is definitely a statement piece. And a statement piece is never going to get past the old ball and chain.  NEVER.  So I thought it would be better to just tell him before he noticed. 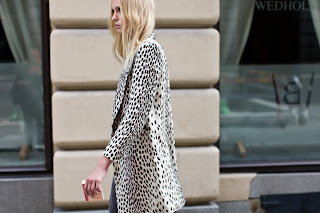 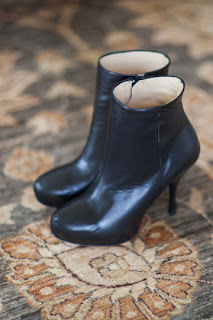 The second thing I ordered were these amazing booties.  I hate that word by the way.  It sounds so juvenile.  Let's call them boots from here on out. I have had them in my closet for a few weeks since they arrived in the post.  After giving Rowan and James a look at my coat, James says "and how much did the black boots cost you?" How does he know this stuff?  I presumed he had found the shoes in my closet, and I was busted.  Turns out James was just joking; he had no clue about the boots.  So I just outed myself when I started to murmur that they weren't that expensive.  It works out for the best this way...now that he knows, I can wear them outside rather than just staring at them longingly in the closet.
Posted by Michelle Springer at 4:26 PM 1 comment:

A big thanks to everyone who bought stamps over the past week. This is the first time I have ever sold any scrapbook supplies and with the amount of e-mails that poured in, getting them cleaned, packaged and mailed in a timely fashion was a workout! Oh, and you know..there is that job that I have, that kid I need to look after, dogs to pat, a husband to boss around... I didn't have the opportunity to package everyone's stamps as lovely as this one. Straight vanilla for the first round that went out about a week ago. I assumed that most would like to get them faster and sacrifice on the pretty. However, I may be talking to the wrong crowd...Skimping on the pretty may be a crime with this here gang. If that is the case, please forgive me. This weekend my mother in law took the little guy for the night so I had the opportunity to spiff some of them up a wee bit. This one is on its way to a gal name Colleen... 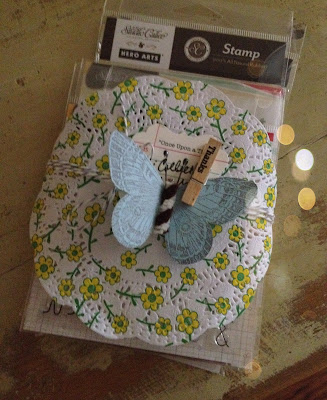 I hope they found happy new homes, and I would love to see what you do with them once you have had the opportunity to use them!
Posted by Michelle Springer at 8:45 PM 1 comment: